Tales of travel, tunes and the occasional taco

Today I begin with an ending…of sorts. You see, what has up to this point been my singular bucket list item for as long as I can remember, was recently checked off thanks to an adventure with my amazing mother.

As your quintessential child of the 80s, the musical influence which served as the soundtrack to my formative years was Depeche Mode. David Gahan, with his creamy baritone, and Martin Gore, with his angelic bari-tenor, sang to me about love, cynicism, hope and just enough naughtiness to make them feel slightly forbidden. Seeing them perform live has been “the dream” for much of my adulthood. Finances, distance, parental responsibilities and the like have always thrown up barriers to making this ticket a reality; that is, until my truly bad-ass mother kicked down those barriers and said to me, “I just did something crazy!” The crazy? Buying tickets for me and her to see my bucket list band…this summer…in Rome.

We land. We’ve got four full days in Rome. We’re off and running. We’ve chosen a three-room guest house/bed and breakfast conveniently located within a 2,000 year-old stone’s throw of the Colosseum, Tre R Colosseo. The rooms are modern and clean, the included daily cappuccino and pastry provided by the adjoining restaurant is delightful and there is a well-stocked mini-fridge with refreshing beverages awaiting your return after a hot Roman walk. The owner and staff are friendly and accommodating and are exceptionally helpful with arranging transportation. Unexpected bonus: Get in a cab anywhere in the city and, regardless of any language barrier, simply say, “Colosseo” and you’ll get close enough. 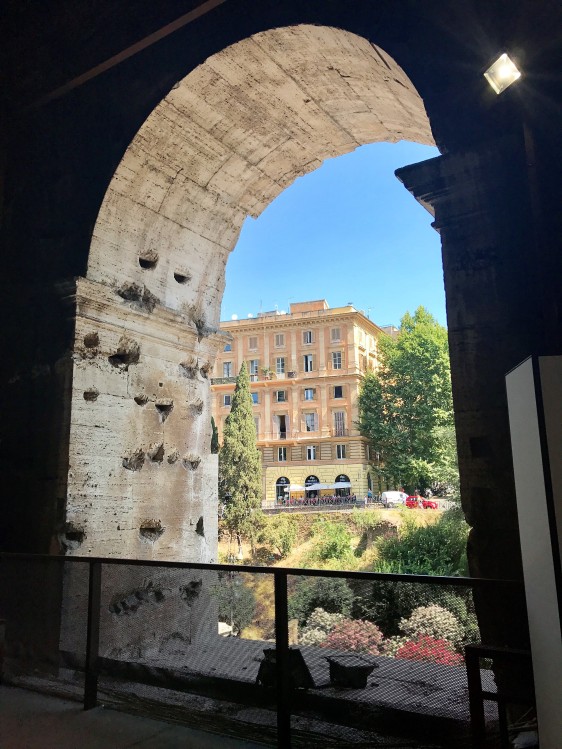 Tre R Colosseo seen from the second level of the Colosseum. 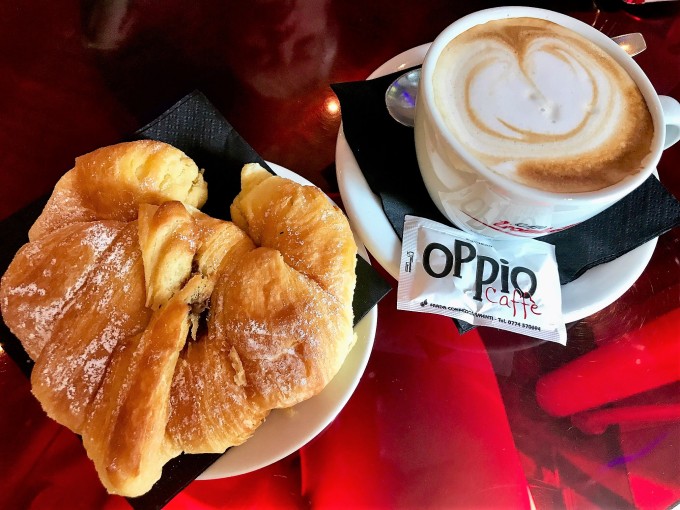 My morning cappuccino and, on this day, chocolate croissant from Oppio Caffe.

Together, Mom and I agree to employ my “top three and then, let’s see” travel mantra. First up on our top three? The Colosseum. (because, required) 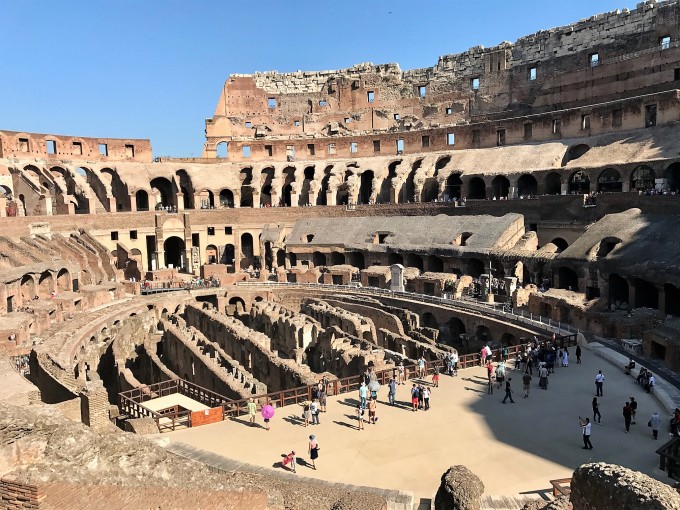 Since I come from a place where our oldest historic buildings are a little over two hundred years old, the power of standing in a place almost 2,000 years old was not lost on me. Mind-blowing and strangely spiritual.

By “unplanned stop” I mean – we had an afternoon with no planned activities and Trevi jumped to the top of the list as a now planned spot. However, we did accidentally stumble upon Trevi a second time while out for dinner one night. Both times we knew we were on the right track because we could hear the murmur of the crowd a few blocks away before actually arriving. This area is surrounded by lots of shops, cafes and general street merriment. At the risk of sounding like an ill-traveled American, visiting this bustling area at night was the closest I felt to being in a movie about visiting Italy or like I was in the Italy Pavilion at Disney Epcot. It seemed to embody all the best romantic notions about a trip to Rome. 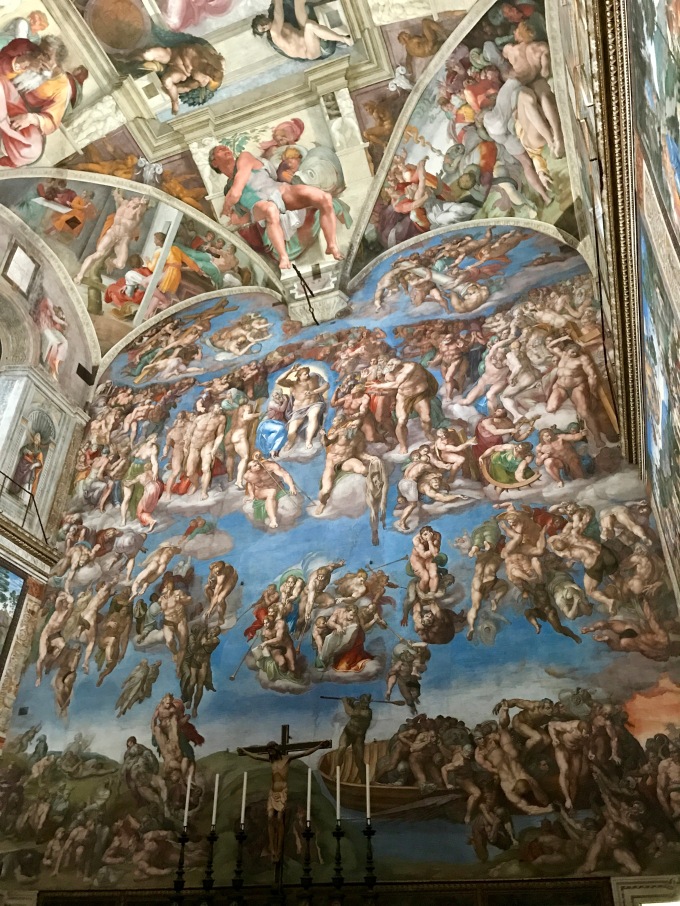 Inside the Sistine Chapel where photos are not allowed. I snapped this before realizing and thankfully did not experience the wrath handed down to others who did the same.

To be clear, I’m aware that the Sistine Chapel is a tiny little piece of the magnificence of Musei Vaticani (Vatican Museum and St. Peter’s Basilica), but I could have spent the entirety of my visit exploring here. When time is limited and you’re on your “top three” plan, best to be specific.

The only takeaway impression I can leave with you is  – opulent. That’s the only word I could use to wrap my brain around all that I saw. This was simply the most opulently beautiful thing I have ever seen. When you grow tired of taking photos of ornately carved and artistically inspiring walls, floors and ceilings, that’s saying something. Sensory overload – in the most beautiful way.

The floor of the Sistine Chapel because it’s probably the least looked at place in Rome.

Unplanned in every sense of the word. Simply out on an afternoon stroll looking to see where our shopping budgets and dinner curiosity would take us and up ahead, “Wow, there are a lot of people up there, it must be something.” Ta-da, the Pantheon appeared. Disclaimer: we did not actually go in, but it was still one of my favorite moments of the trip. To my left, Roman temple dedicated to all the the gods of pagan Rome; built somewhere around 125 A.D. To my right, street musician playing Pink Floyd’s Shine On You Crazy Diamond. And, what are all the people looking at? You guessed it, Pink Floyd wins the day. Off to find dinner!

Let me stop here and go on record as saying that the food in Rome is everything it is cracked up to be. I think it speaks volumes that even though we put in nearly 23,000 steps per day on this trip, I still gained three pounds. (Just sayin’) 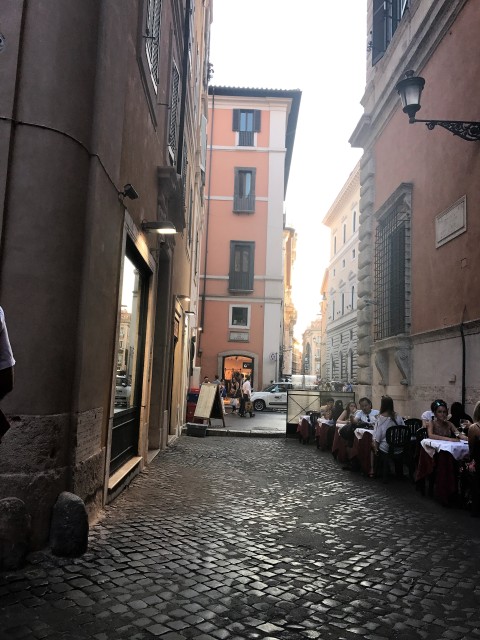 The atmosphere of most of our choices is nothing to sneeze at either.

Must-do three, the inspiration for this trip and bucket list fulfilled: Depeche Mode

The Depeche Mode: Global Spirit Tour concert was held at Stadio Olimpico in Rome. I have traveled to many a concert in my life but can say, without a doubt, this is the largest crowd I’ve ever been a part of. So big, in fact, I looked it up. Capacity is listed as 72,698 and I would venture to guess that there had to be every bit of 50,000 people there. Interestingly though, entering and exiting as well as general comfort within the stadium didn’t feel crowded or overwhelming. It almost felt like lots of little “stadium neighborhoods” connected to one another.

A band I was unfamiliar with, Algiers, took the stage to open. I hesitate to truly review them because the enormity of this moment had me distracted and rapt with anticipation, but the crowd seemed to enjoy them.

The lights lower and Depeche Mode takes the stage. David Gahan is “in voice” and the band clicks like not a moment has passed since I first heard Black Celebration in 1986. Gahan doesn’t just own the stage. He seduces, captures and lords over it commanding it do his bidding in delivering the doctrine of Depeche Mode. (Lest you think I exaggerate, you must know there are a number of people walking around in “I’m one of the devout” t-shirts, a nod to a lyric from their 1987 song Sacred from Music For The Masses.) It felt like they reached out into the crowd grabbed us as a collective entity and swung us around over their heads in victory. I held it together until tens of thousands of us in unison sang the chorus to Enjoy the Silence.

And then, the tears came.

It was at this moment I realized a truth I think many of us never acknowledge. The truth that although this had been my dream for…well, forever; way deep down I think I had believed it might not ever actually happen and, here I was.

Whether one of the devout or not, it’s a heck of a show. Go!, if you can or even if you think you can’t.

There’s really no way to sum up an experience as amazing as this. Rome was magical, everything I expected and, at the same time, nothing like I expected. I guess it’s poetic in a way. It took me traveling across the world to a place where the past is ever-present to realize that closing the book on a bucket list item isn’t the end at all. It’s placing a monument to an important moment in your history and making space for new adventures to begin.

I better get busy, I have a new bucket list to write!

This site uses Akismet to reduce spam. Learn how your comment data is processed.